I look into the rear view mirror and wave goodbye to my support crew, Batgirl and Mega Ranger (aka wife and daughter) who are too sick to travel and I set off nervously alone into the sunset. There is only one who can save me now. Batman.

Six weeks prior I was made redundant from my job which came as a huge shock. I’m a mid-40’s, run of the mill office worker, how would we pay the bills?

But I also knew I had it a lot better than most, especially those in country NSW. I’m not particularly fit or ambitious but I do love a walk. So I conceived the Superhero Walk; a fundraiser where everyday people get dressed up as their favourite Superheros and walk to raise money and awareness for kids suffering from life threatening illnesses and situations.

And so it was that I found myself driving to Narrandera in South West NSW with a bag full of unforgiving lycra superhero outfits, hoping to spend five glorious days walking 100km’s to Wagga Wagga. Narrandera, a small and peaceful country town who had no knowledge of my arrival or my intention to walk through their fine streets dressed as the Flash the next morning.

But I couldn’t back out. I was hoping to raise over $3,000 for the local charity Country Hope. Country Hope is an extraordinary organisation who support over 120 families in the Riverina with kids suffering from life threatening illness. They pay their bills, do their housework, provide counselling, stage an extraordinary yearly camp and much much more. They’re salt of the earth people, folks you never hear about until you need them. The real superheros.

The next morning I’m sitting in my campervan dressed as The Flash which leaves nothing, absolutely nothing to the imagination, and not in a good way. I stride proudly into the Caravan Park and past my neighbour who physically recoils at the sight. Not wishing to be misunderstood, I run over to him and thrust a flyer in his face, babbling that I don’t always dress like this, I’m raising money for Country Hope. As I make my getaway, he yells “Oi, you in the red”. Oh no, I’m not even going to make it out of the caravan park. “Good on you mate, bloody great thing you’re doing. Country Hope have helped me and my family. Here ya go”. He hands me $5 and slaps me hard on the back.

For days I meander along a little known country road where farmers wave cautiously at me and every turn is picture perfect. It’s some of the most beautiful country I’ve ever seen. 20km’s a day seemed like a long way but out here it’s a privilege to put one foot after the other. I camp beside bulging rivers filled with thousands of birds competing to be heard and a sense of peace you don’t find in the city. Earlier in the year I had been battling anxiety caused from stress at work. I’d run from meetings and hide in the car park with my feet in the air, breathing heavily into a paper bag. There wasn’t a hint of it out here and as the miles fell away, so did my worries.

My support crew regained their strength and joined me on the road. As we settle into camp, I see a trail of dust approaching from the east. The car stops and he steps out, as I knew he would. Batman. Knowing I was alone, my best mate has driven 6 hours to help. The Superheros are ready.

As we settle in I decide it’s a good idea to move the van away from the fire. I hear Batgirl call out “Don’t go down the pothole”.

“Whatever” I think as I reverse perhaps a little more enthusiastically than required.

“WATCH OUT FOR THE POTHOLE” she screams.

I’ve somehow smashed the window into microscopic shards of glass which have covered the bed and a good part of the campervan. There’s a hole in the back of the van big enough for a wombat to crawl through and the draft is noticeable and cold. Batgirl is quick to let me know, that’s where I’ll be sleeping for the rest of the trip.

The next morning I look over at Batman who’s dressed in head to toe lycra that may be a tad optimistic. He’s wearing his undies on the outside, tennis shoes and thick soccer socks. He looks like he’s about to give birth to a rabbit.

We turn east and spend the first hour in elated naivety. The fresh air, staring cows, vivid colours towering trees, we are spellbound by it all. An hour into it we take a break and batman pulls out his only rations, a pack of spicy Dorito CC chips and 3 litres of warm water in an old apple juice bottle. He quickly realises he may have misjudged things but doesn’t stop eating, even when tears are streaming from his mask. He drinks more water which only makes it worse and we laugh like we did when we were kids.

We battle the day, a day of straight roads punctuated with locals who pull over for selfies and flies that appear to us city folk to be in plague proportions. Our conversation rambles but never stops and despite the pain, we know this is a great day. The last 5km are the hardest. Batman’s tennis shoes have produced some chunky blisters and he has a bad case of dry mouth. We crawl into the campsite where we lay down on an ants nest and promptly fall asleep.

We bid farewell to Batman and continue our journey eastwards. We could be in outback Australia the road is so black and the soil so red. Locals pull me over and politely enquire as to my sanity before handing me whatever coins they have. I’m given food, water and plenty of advice on the perils of wearing lycra and walking long distances. Many people know Country Hope and everyone understands the importance this self-funded charity makes to the region.

The last day has arrived and I’m thrilled but more surprised we’ve actually done it. I stride proudly through Wagga Wagga’s main street dressed as the Green Lantern, handing out flyers to open mouths and high fiving kids.

I round the final bend into Country Hope’s street and see the wonderful welcome party awaiting me. The Superheros present them with a cheque for $3,085 from a great bunch of supporters we’ve picked up along the way. I’m humbled by their reaction and feel a long way from a run of the mill office worker.

My feet are cut and sore and my body aches but I’d do it all over again in a heartbeat. And in 2016, that’s exactly what we’re going 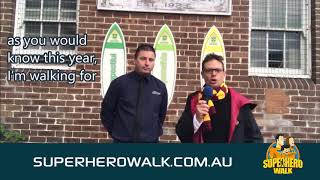